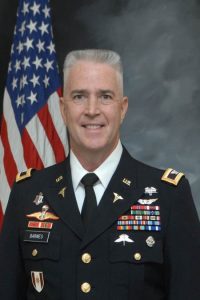 Scott D. Barnes, MD became associated with Boulder Eyes after a distinguished 30-year career with the military, retiring at the rank of Colonel in 2017. He also serves as the Chief Medical Officer for STAAR Surgical, based in California.

Having done more than 12,000 laser vision correction procedures, Colonel (retired) Barnes is currently the highest volume implanter of the Visian Implantable Collamer Lens (ICL) in North America, with over 3000 ICLs. He has taught well over 500 surgeons in laser vision correction and more than 100 surgeons in the ICL. He holds medical licenses in Wisconsin, Colorado, and China (where he was implanting advanced EVO ICLs until COVID affected international travel).

Since 2004, Dr. Barnes has served as Chief of Ophthalmology Services, Womack Army Medical Center, Fort Bragg, North Carolina. He was asked to serve as the theater ophthalmology consultant and surgeon in Iraq and Afghanistan in 2005.

In 2006, he returned to Womack and helped to establish the use of ICLs in the Army. In 2008, Colonel Barnes was awarded the Army Surgeon General’s A designator, similar to the level of a professor at a civilian institution.

Dr. Barnes began his medical career in 1986 as a research assistant in the Department of Genetics, Harvard Medical School/Children’s Hospital in Boston, and in 1991 became a general surgery intern at William Beaumont Army Medical Center. He went on to become a Special Forces (“Green Beret”) Battalion and Group Surgeon as well as the Deputy Surgeon for the US Army Special Operations Command.

Dr. Barnes has an amazing wife, two beautiful daughters, and a wonderful son-in-law. While previous hobbies included high altitude parachuting, scuba, and deep-sea diving, and anything extreme back when his flattop was black and heart rate was half what it is now…he now enjoys traveling with his family, teaching surgeons, and anything related to the Green Bay Packers